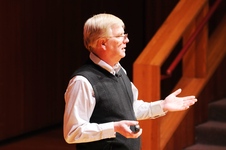 My focus is climate change. I give a (usually 40 minute) Powerpoint presentation about the state-of-the-art climate science and effects that climate change is doing to the planet. My presentation facts are based on reports from NASSA, NOAA, the Snow & Ice Data Center to mention a few. I work hard to dispel the fake science that is based upon ideological hearsay, not science. To date, I have given 251 presentations including at the COP-15 Climate Summit in Copenhagen, the United Nations in New York, many colleges, schools, churches, conservation organizations, Earth Day events and television shows.

Richard Whiteford BIOGRAPHY Richard Whiteford is a writer, environmental activist, and a communications professional. Alarm over the massive loss of Earth’s variety of plants, creatures, and ecosystems, the dangers of pollution on public health, and the impending impacts from climate change, compelled Mr. Whiteford to devote his life to fighting for environmental protection. As a writer Mr. Whiteford has over 500 articles published in newspapers, magazines, and other publications. His science-based articles educate the public and influence political decisions on environmental issues. Beginning in 1994 he wrote a three year series about endangered species for the Philadelphia Inquirer. In 2006, Voyageur Press published his book, “Wild Pennsylvania”, ISBN# 0-76032638-X which has since sold out and a second book is in the works with Schiffer Publishing that will be out in June of 2021. As an environmental activist Mr. Whiteford initiated the preservation of 3,000 acres of natural land and worked on committees to help initiate changes in township, state, and federal laws for stronger environmental protection. He lobbies Congress and works on legislative committees on issues like Off Road Vehicle destruction on public and private land, the Endangered Species Act, National Energy Policy, protecting Wilderness Areas in National Forests, preventing oil drilling in the Arctic National Wildlife Refuge, stopping Mountain Top Removal coal mining methods, climate change, and many other issues. He was a consultant to Pennsylvania’s 21st Century Environmental Commission and became a founding board member of the Pennsylvania Biodiversity Partnership. As a communications professional Mr. Whiteford teaches environmental issues, writing classes, and communications skills as a consultant at many universities, high schools and environmental education centers. He’s a keynote speaker at many conferences, Earth Day events, and churches. In 1997 he was an honored guest at the United Nations for the Earth Day International celebration and spoke again at the United Nations in 2009 at the 18th annual International Conference on Health and the Environment about global warming. In 1996 the US Postal Service hired him to promote the Endangered Species collectible postage stamp series. In 2000, Honda America gave Mr. Whiteford the state-of-the-art electric hybrid Honda Insight for media events in the Philadelphia market for the Earth Day millennia celebration. In 2009 he opened an Off-Broadway play starring Mel England called Swimming with the Polar Bears doing a global warming presentation that segued into the main show each night for a week at the Bleecker Street Theater in New York City. He has appeared on BBC and Korean television, NPR’s radio show, Justice Talking, Art Fennell Reports on Cn8 TV, WFMZ TV, two national TV broadcasts on AccuWeather’s Headline: Earth™ , and an interview on Northern Deutch Radio, NDR in Hamburg, Germany. He promoted film screenings for Paramount Pictures for Al Gore’s Inconvenient Truth and National Geographic’s Arctic Tales, Warner Bros. 11th Hour by Leonardo DiCaprio, and the Ken Burns National Parks Series for NPR at WHYY in Philadelphia. In 2007, Mr. Whiteford completed Al Gore’s training and is a certified presenter for the An Inconvenient Truth slide presentation and, to date, has conducted 247 presentations including at the COP 15 Climate Summit in Copenhagen at the Klimaforum to an audience of 300 people from around the world. He was featured twice in Al Gore’s The Climate Project newsletter as one of TCP’s top presenters. He helped promote Washington DC’s 40th Earth Day event with Earth Day Network by getting Dr. James Hansen from NASA and Dr. Stephen Schneider from the IPCC as speakers and he filled four tour buses from the Philadelphia area to attend the event. Employment history: National Sierra Club as the Northeast Region Conservation Organizer, Outreach Coordinator for the Highlands Coalition, the Mid-Atlantic Campaign Manager for the Wilderness Society, the Director of the Important Mammal Areas Project for the National Wildlife Federation, and the Outreach Representative in Pennsylvania and New Jersey for Defenders of Wildlife. In 1998 he received the Sierra Club Award for Environmental Activism and in 2006 he won the National Sierra Club Environmental Hero Award. In 2010 Mr. Whiteford served as an advisor on the Interagency Climate Change Adaptation Task Force for the White House. He serves on the Board of Directors for the Okehocking Nature Preserve near West Chester, PA. Mr. Whiteford is on West Chester Universities Climate Action Planning Team which is associated with the American College and University Presidents Climate Commitment (ACUPCC). See: http://www.youtube.com/results?search_query=Richard+Whiteford&search=Search http://www.facebook.com/home.php?#!/richard.whiteford Contact: Richard Whiteford – 610-246-7974 or Savebiosphere3@Verizon.net

not associated with any guides

not associated with any library items